eLearning WMB are carbon reducers, with a net carbon reduction of 500 times more than the company emits.  The management team wants to do more where possible and as such contributed a day last year to brainstorm carbon reduction ideas.  The following idea - a wind turbine which works 24/7 with no wind - is being freely made public in the hope that it may one day be built.

WInd power as you know has the ability to power the world (at least the UK) but the problem is that they only can run 70% of the time.  If there was a way of ensuring wind turbines ran 24/7 then this could be the key factor in going carbon neutral. 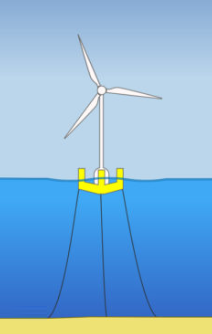 Floating off shore wind turbines have been a reality for over 10 years.  They can float in deep waters (would require 100m depth) and can be very large as noise is not a problem. 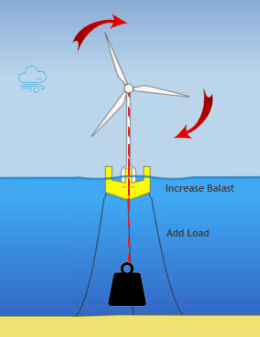 Now if we modify the design to add a weight to the device (25,000 tonnes), we can achieve this by adding additional ballast to the turbine - retrofitting existing turbines would be easy.

This also has the effect of anchoring the turbine allowing for the construction of larger and more stable turbines. 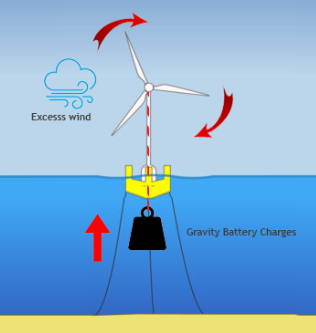 The weight is connected to the turbine so that in cases of excess wind instead of stopping the turbine, the extra energy goes into lifting up the turbine.

This is a mechanical process and as such is a highly efficient way of storing energy. 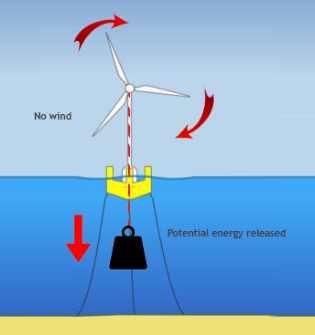 When there is no wind, the weight is lowered, this rotates the blades and generates electricity when it's calm.. 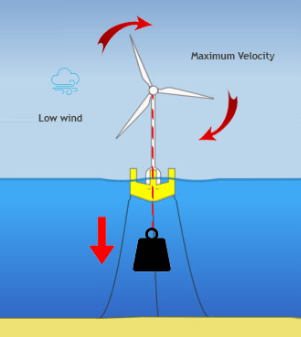 With monitoring of weather patterns the load could also be used to power the turbine in low wind conditions at the maximum safe velocity.  This would ensure the greatest efficiency possible from the system.

There are nearly 50,000 off shore rigs in the world.  They are among the most productive fish habitats in the world so to scrap them would be extremely harmful to the environment.  Turning such devices into wind farms will protect the environment and generate energy.

The same can be applied on ground.  It would involve digging 50m deep holes of 30 diameter but could be worth considering in landlocked locations.

This was my first idea but was dismissed due to stability issues with turbines and the cost of excavation.

Unlike other gravity battery ideas, this involves simple gearing and software (to monitor weather conditions and adjust relative energy distribution.)  There is no need for complex robot winches, deep mines or the waste of energy to convert wind power to electricity to potential energy and then back to electricity when needed.  This solution is large but efficient.

The building of just 1,300 mega wind turbines would supply the energy needs of all UK households, this is based on existing energy calculations - this figure would probably be reduced to around 1,000 once the increased efficiency of the system was taken into account.

END_OF_DOCUMENT_TOKEN_TO_BE_REPLACED

e-Learning WMB are accredited by